Already for the second time, EM-Technik GmbH participates with a generous donation to the municipal day care center Löwenherz, which is located in the immediate vicinity of the company.

As part of the official inauguration of new playground equipment at the Löwenherz (lionheart) daycare center, Maxdorf, Mayor Werner Baumann, his local councillor Bernd Lupberger and the head of the facility, Reiner Pfundstein, presented a gift to Michael Meier. 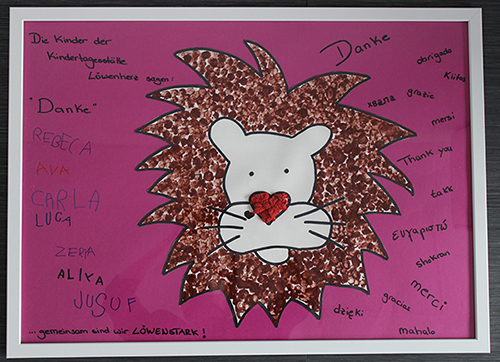 EM-Technik GmbH, which was already involved in the creation of the facility for around 90 children with a donation in 2018, was now, two years later, also happy to help out in the outdoor area and also donated a tree house in addition to two seesaw animals and a double swing.

The kindergarten children expressed their gratitude for their new play facilities with a self-made picture of a lion and the message "Together we are strong as lions!"